I Bless the Rains Down in Guy-an-a

If there is one thing that can almost ruin visiting the rainforest, it’s well, rain.

Our trip to interior Guyana got off to a very slow start. In short, the tour company forgot to tell the driver to come pick us up for our flight. An email and a few emergency phone calls sorted everything out on time and we were at the Ogle airport just before our flight was scheduled to leave. Ogle International Airport (they fly to Suriname from here) is not more than two shack buildings, with two check-in counters and a couple of immigration booths. It’s certainly not the most basic of airports I’ve ever seen, but it’s not far off either. After rushing to the airport in a panic for 8:30, we were informed that the flight would be delayed until adequate weather opened up in the interior. Ultimately, after waking up at 5:30, our flight didn’t leave until 10:00.

Amongst the general public Guyana is often confused with the West African country of Guinea, or Ghana, or at the very least somewhere on the “mother continent”. While this is obviously incorrect, I’m about to make so many similes that even I am starting to think that Guyana might be in Africa! To start off with, the Rupununi savannah in the southern part of the country looks very similar from the sky as the Maasai Mara. For those subscribers of my previous African blog, you will remember that “Mara” in the Masai language means ‘spotted’ and refers to the way the Acacia trees spot the Kenyan savannah. The same effect exists here with the Mora tree. The history of the Rupununi savannah is that it used to be home to a huge river during the time when the Amazon River flowed to the Pacific. Then, over thousands of years, the Andean mountain range rose up and pushed the Amazon to the Atlantic. When this happened, the Amazon swallowed up the flow from this ancient Guyanese river, leaving behind it a large area of shrubby flood plain. As the Andes continue to rise, the land in the Rupununi savannah is constantly being pulled, making the Rupununi a big rift valley, very similar to, as you guessed it, the Great Rift Valley in East Africa! 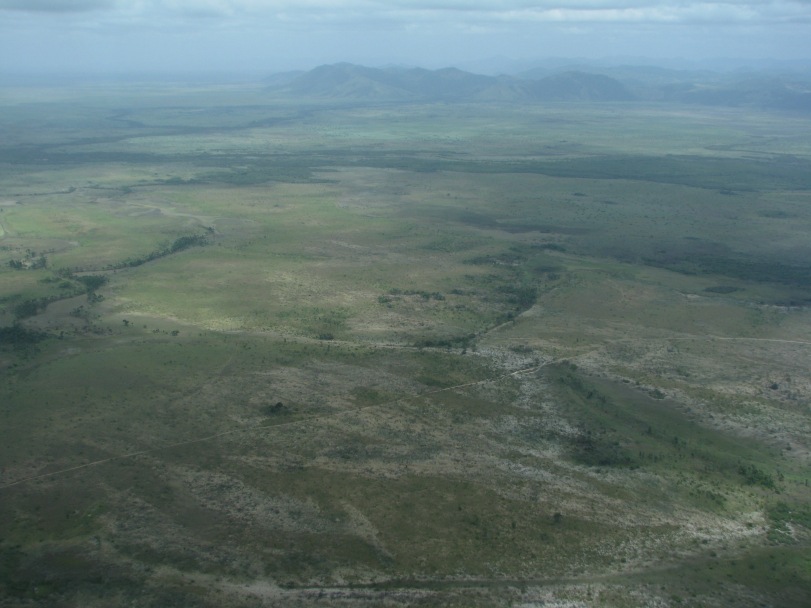 With the weather pattern quickly closing up, our descent to Annai was something similar to what pilots execute when landing in Gaza to avoid Israeli gun fire. Instead of a long linear approach, our path to the ground was a rapid spiral that took us through the only cloud opening, directly above the air strip. As the only two passengers departing the 12-seater Cessna, we were greeting at the neighbouring Rock View Lodge by Colin Edwards and family. Our stay (for now) was brief as Veto, one of Colin’s sons was ready to transfer us to our lodge in the jungle.

The trip to the Iwokrama Lodge was a two hour trek via Guyana’s only road through the interior. Now, when I say it’s the only road, I am certainly not suggesting that this is some kind of major thoroughfare. I’m talking a dirt road that is deteriorating with the rain that is still falling and traffic so light we only saw four vehicles in either direction the whole time – and two of them were a result of an effort to rescue someone from the mud that we were temporarily involved with. Along the way we spotted Jabiru Stork (very similar to the Marabou Stork in Africa), Black Currasow and jungle so thick it often blocked out the horizon at the end of the road.

The Iwokrama Lodge is set on gorgeous ground on the edge of the massive Essequibo River. This river is so massive that at its mouth, where it reaches the sea, it is 21 miles across and contains within it islands larger than some of the Caribbean countries! The lodge is a collection of a few cabins and a large common area, but the openness onto the river makes the place feel like a proper sized community. After a brief introduction to the lodge, and to the staff, it was off to the activities. Unfortunately the rain made for poor wildlife viewing, but with the rest of the time spent walking through the jungle or on a boat along the river, the day still had its highlights. I learned more about the Mora tree and how its large buttressed trunk can be used to communicate with both humans and birds. I learned to identify female and male Capuchinbird calls and how they are more annoying than that siren they blow when the Vancouver Canucks score a goal. I looked up and watched raindrops fall for hundreds of feet from the canopies of the gigantic trees. Finally, I learned how to spot Caiman at night from the reflection in their eyes. All in all, probably not the most memorable day, but at the end, drifting along the Essequibo River with only the moon lighting the way, everything seemed alright. 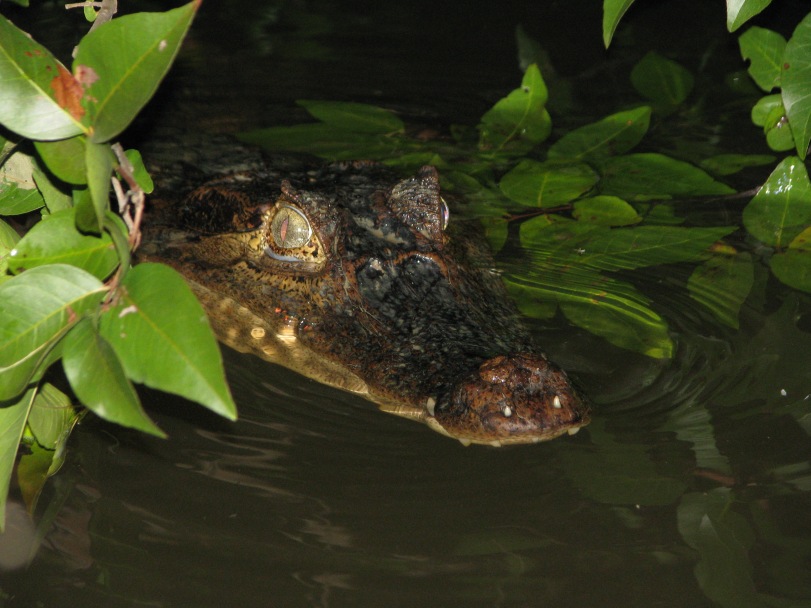 When the animals disappoint, the next logical thing to do is to rely on people and places. The next morning we went on a hike up to the summit of the nearby Turtle Mountain. Joining us was Stanley, as sweet pastor from Georgetown who was staying in the area on his way to teach scripture in the south of the country. Then there was Jann, and his wife Sandra, who were Americans working for the Department of State at the embassy. Finally there was Rahushni, friend of Sandra, a former Torontonian who had now moved back to Guyana to take over the family confectionary business. And, of course, there were Alex and Elvis, our two local Makushi guides.

Regionally, the Carib and Arawak tribes are likely the ones that get the most attention, but it is the Makushi tribe that is most prominent here in Guyana. Outside of the coastal areas, this really is their country. And unlike in North America, and most places around the world, the local aboriginals govern, own and operate nearly everything. Even with the Iwokrama reserve, almost all the guides and staff are from local villages. Not only is this the “nice” thing to do, it also lends to the comprehensive experience for the visitor. It’s more authentic to learn about the traditional uses of the forest from the descendants of those that employed the practices. While before I was simply amazed at the size and diversity of the forest, things like medicines, weapons, tools, building materials and even aphrodisiacs became part of what I was looking out for. The traditional Makushi language will likely die out in a generation or two, but its people are directly tied to the potential prosperity of the country.

The word Iwokrama is a Makushi word meaning “place of refuge” and was originally used to indicate a sort of “green zone” during times of war between the Makushi and Carib tribes. Now, the refuge refers to the fact that it is one of the last truly untouched tropical forests in the world. It’s a place of research, a preservation of habitat and at one million acres, is larger than the island of Trinidad!

Along the way up Turtle Mountain we learned more about traditional uses of the plants, awed at the size of the trees and even saw a jaguar…footprint. At the summit, we looked out onto endless jungle for as far as the eye could see in every direction. Birds such as Snail Kites, vultures and hawks soared below us! As the saying goes, it is often difficult to see the forest through the trees, but from up here, that wasn’t a problem at all. On our way back to the lodge we did manage to spot a snake, a couple of Giant River Otters and a whole bunch of spiders. One of the unfortunate things about being the tallest person in the group on a hike through the jungle is that no matter if I am out in front or at the very back, I get non-stop spider webs in my face. I was thus forced to employ a handkerchief as a mask or to wipe the webs from my eyes. This caused me to understand just how useful a handkerchief can be. So much so that I may make a ‘kerchief a regular accessory in my wardrobe back home. Perhaps I’ll also add a pipe. Or a monocle. Or a pocket watch. Oh yes, definitely a pocket watch! Hip hip.

In the afternoon we made our way to the Atta Rainforest Camp. ‘Atta’ is the Makushi word for “hammock” to signify the type of accommodation that originally existed here. These days things aren’t too much more established. Two cabins now hold beds with exterior washrooms attached at the back, but a wall of jungle still surrounds the modest lodging on all four sides. A place of quiet and tranquility, the major attraction here is the canopy walkway located about a kilometre away. A series of six lookouts built near the top of the forest is connected by a network of suspended walkways. To contrast the spectacle of standing on the ground and looking up at the height of the trees, now we could look down at the forest floor from a hundred feet up. It was one at a time across the walkways and being at the back of the group, I spotted something both guides and all four other visitors missed. Curled up in the corner of one of the walkways, just before the third platform was a Rainbow Boa. Probably a dozen feet long, it was sleeping as it attempted to hide from the rain.

As we moved to the next platform, the rain let up and the clouds parted enough to let the sun through. As this happened, thousands of little yellow butterflies came out to dry themselves out and play in the warmth. The other advantage of being this high up was that we could look over the canopy to the west. This meant that we could watch the sun set over the entire forest and directly on top of a massive semicircular Purpleheart tree.

Back at camp was the group of guests that would be staying at the lodge with us that evening. I don’t really know how else to put it, other than, a group of five Americans all in their seventies (at least) dressed from head to toe in khaki, with pants tucked into socks. They were here to see birds and brought with them a checklist of over eight hundred species. It was simultaneously the dorkiest and cutest thing I may have ever seen. They initially kept to themselves like a shy group of kids, but over the evening they did warm up to us.

That night the power went out as I was in the middle of a pre-dinner shower. It made for an unforgettable experience of standing naked in the middle of the jungle and looking up through a couple whisps of clouds just thin enough to make out Orion’s Belt. So although I never got to see the jaguar I came here to find, or actually any land mammal for that matter, my first visit to the South American jungle wasn’t devoid of magical allure by any means.

Forest canopy from the walkway

View from the canopy walkway