Perspectives of Coachella: The Rookie

It’s been a few weeks since Coachella Weekend 2 (Friday April 19th to Sunday April 21st) has come and gone.  As a first-timer, I couldn’t wait to hang out in the posh V.I.P. area and meet some celebrities (as my dear friend Beau pointed out) while listening to familiar music here and there.  Well anyone who has experienced Coachella will tell you that it’s so much more than that.  I can’t imagine a more well-organized music festival with so much to do and see beyond the music.  And speaking of the music… what a treat!  So many of the performers were even better live than expected.  Plus how can you go wrong when you’ve been relaxing in the sun all day and eating glorious summer foods.  It’s not possible!  I’ve wanted to go to Coachella for years primarily because I love outdoor festivals and the lineup always looked impressive.  I also love California and wanted an excuse to go back and soak up more sun.  The lineup was a lot less mainstream this year which disappointed my friends (a group of us bought advance tickets) but in the end, we all had an amazing time with no regrets.

Here’s my experience in summary:

Arrived in Palm Springs on Thursday to find our rental house, scour the outlets and inhale a lot of desert dust.  That dust still haunts me now!  I just want to breathe through my nose again.  We also spent an evening in the local casino closest to our house… met some very interesting folk there. 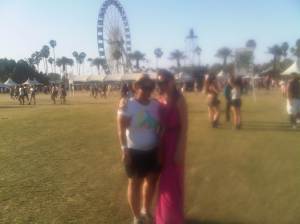 Early-ish in the morning, my fellow V.I.P. band-wearer and myself were dropped off at the venue.  As Beau mentioned, they check your bags when you enter.  And now this is the part where I start sounding spoiled and snobbish- in V.I.P., the bag check was very minimal.  There was almost no wait (no matter what time of day we entered) and after the casual peek inside your bag, you just tap your pass to enter.  As you walk on the scenic path lined in some parts with rosebushes, statues, and fountains, there are random security guards.  These guards don’t want to check your bag or slow you down.  They just say hello and wish you a good day.  One of them even sang to us!  Then we entered the main V.I.P. section close to the main stage (there were 2 V.I.P. sections at Coachella) and I could hear The Neighbourhood in the distance.  I thought that I had missed their act completely!  We hustled to the stage to hear the last of their performance.  What a great way to start the day.  Then we did some very light exploring and found our locker rental before returning to V.I.P. for a bit.  There are fountains and cooling mist fans and giant couches… oh my!  Not to mention almost no wait for any food or drinks.  Plus the large air-conditioned tent that feels like a club with blue lights, chandeliers and a huge bar.  It almost seems like they hire too many bartenders for the amount of people JUST IN CASE it gets a little busy.  I’m not complaining… it was fantastic.  The service was friendly and quick.  My favorite part of the V.I.P. experience?  The Powder Room.  A little corner getaway for the ladies to freshen up with all sorts of free toiletries, soft couches and a little salon set-up to get your hair, make-up or nails done for free (tip only).  Wow!  I literally forgot about looking for celebrities.  I feel like the only thing missing was a mimosa and a cool face cloth as you enter!  All this and we still hadn’t made our way to the V.I.P. Rose Garden yet, which was another V.I.P. section on the grounds but closer to the EDM tents.  So V.I.P. is not the reason that I only saw Beau twice during the weekend (I blame our differences in musical taste) but my one friend and I admittedly did neglect our other friends at some points to spend time in the two peaceful and relaxing sections.

Inside the Rose Garden

The Rose Garden in the evening

As far as music, there is SO much to see.  A lot of the bands on my must-see list were overlapping each other.  I personally feel that seeing so many talented performers in one weekend justifies the price of the weekend pass.  I expected to watch a lot more of the rock/indie performances but I surprisingly spent a lot of time in the EDM tents.  The experience was incredible in the tents- everyone was dancing and into the music.  You couldn’t stop yourself from moving, it was infectious!  We saw a lot of great acts including Hardwell, Bingo Players, Paul Oakenfold, Dog Blood, Bassnectar and Benny Benassi.

According to my friends, Nicky Romero was an unforgettable EDM act that I missed out on as well.  At that point, I was instead listening to Of Monsters and Men (love them live! I caught them on SNL recently and it reminded me of their fun performance) and Passion Pit.  I also snuck back into V.I.P. quickly by myself to chat with the girls working in the Powder Room and to grab a blueberry lemonade.  I just loved being in there and maybe I was trying to visit as often as possible to get the most value from the pass.  Other acts that I caught include Major Lazer (Beau described this experience in detail and he was right- they had a vibe that drew us in), Alex Clare (I caught two of my favorite songs of his plus a cover that he did), Blur (blah, a little disappointing), Grimes (just as I expected- she’s strange and shy but a really cool performer), How To Destroy Angels (Beau also described this perfectly- it was interesting visually but that was about it), Janelle Monae (she is definitely a fun performer live), Metric (wow!), Phoenix (not as exciting as I had expected), The Airborne Toxic Event (another wow), Red Hot Chili Peppers (I’m a fan and I wasn’t disappointed at all), and The Lumineers (I missed a lot of their show but what I caught was really good).  There were also many acts that I had on my “must-see” list that I unfortunately missed (Yeah Yeah Yeahs, Vampire Weekend, Postal Service, Deap Vally, Moby, Japandroids) and some acts that I later wished I had seen (Nicky Romero and Tegan and Sara).  There’s just so much that you can’t possibly catch it all. 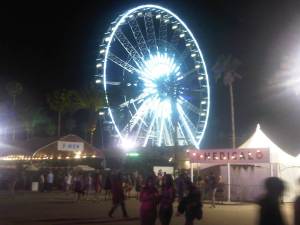 As a Coachella rookie, I was also excited to see all the other attractions at the grounds.  The thing that impressed me the most was the organization of everything.  Yes, there were lineups.  But the lineups weren’t ridiculous and there was a lot of whatever you may need.  When my friend hurt her foot, we found a medic tent right away and we were helped without waiting.  When we needed to get our locker, the service was friendly and fairly quick.  Food was everywhere, merchandise shopping was ample if you wanted a souvenir, the washrooms were fairly clean and there were so many that you almost never had to wait more than a minute or two.  If anyone is worried about inconveniences at an outdoor festival, I think Coachella will calm your fears.  On top of that, there were a lot of fun things to do!  We took a spin on the giant ferris wheel, danced in the chaotic Do Lab while getting sprayed with water jets, watched the strangeness at the Power Plant, and followed the giant snail around for a while.  I read that there were a lot more activities in the camping area but we never made our way there.

View from the ferris wheel 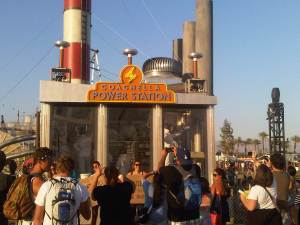 This seemed strange and pointless

My friends loved Coachella but they are now talking about seeing some other festivals for the next year or so.  I’ll give other festivals a try but based on past experience and what I’ve heard, I don’t think we’ll find another with the level of organization, cleanliness, and diversity in music genres.  Not to mention size and other cool things to check out.  I have a strong feeling that I’ll return to Coachella in the end and I may even become a seasoned regular like Beau.